Changing the World by One Act (MP3)

Changing the World by One Act (Sermon Text)

Today is Palm Sunday, a day we remember Jesus’ triumphal entry into Jerusalem. It was during the last week of His earthly life when He entered the city of Jerusalem on His way to the cross. Jesus had set His eyes towards the cross of Calvary for the work that He was sent to do. What happened in Jerusalem almost two thousand years ago was a significant event that changed the world. History is replete with people who changed things. King George III’s disastrous response to his American subjects sparked the American Revolution. While some may disagree, by many accounts, South Carolina’s bombardment on Fort Sumter started the Civil War. Japan’s attack on Pearl Harbor awoke the “sleeping giant” as Admiral Yamamoto famously stated and caused the United States to enter World War II. Terrorists on September 11, 2001 changed the lives of many Americans and prompted the “War on Terror”.

According to the Apostle Paul, two men changed the course of human history by one simple act. These two men did two different things that resulted in two very different outcomes. While Paul mentioned two men, I will suggest to you three acts from the text:

One Act of Disobedience Brought Condemnation

The first act mentioned in this passage that changed the world was Adam’s sin. We often call this the Fall of Mankind or the Original Sin. God had told Adam not to eat from the tree of the knowledge of good and evil “for in the day that you eat of it you shall surely die.” (Genesis 2:17) Not only did Adam disobey God and commit the first act of human transgression, Adam’s sin condemned him, his wife, his children, and all of the human race. Paul reiterated that in verse twelve of this passage:

Romans 5:12 Therefore, just as sin came into the world through one man, and death through sin, and so death spread to all men because all sinned.

Adam changed the world through one act of disobedience. Through him, sin and death was brought upon all mankind. We might understand Adam and Eve being punished for their sin, since God had explicitly told them what not to do; but, why is everyone else condemned for Adam’s sin? For all of us to be lumped in with Adam’s transgression flies in the face of our modern individualism. We are people with a free will and should not be condemned for Adam’s reckless transgression, right? The reason we are is that Adam represented the human race. He showed us what each of us would have done if we had the same temptation. Had it been any of us with free will who desired what was a “delight to the eyes”, we would have made the same decision. In a sense, we were Adam. But, if you have a problem being linked with Adam’s sin, do you also reject Jesus taking on the wrath of God for all of humanity? He represented you on the cross. Do you have the same reservation for receiving Jesus’ righteousness by believing in Him?

We have already seen in Scripture that all of us sin and no one is righteous. That probably comes as no surprise to any of us. It is not the specific sins we commit that condemn us, but it is the “sin nature” within us that causes us to sin. The consequence of sin is death. Death is not natural even though we see it all the time. Every living being on the planet eventually dies. That may seem natural but it was not the natural state of things or the way the world was intended to be. Death is the result of one man’s disobedience. Because of Adam’s act of disobedience, we all sin and we are all condemned. Fortunately, that was not the end of the story.

One Act of Righteousness Provided Justification

Because of Adam’s sin, we were all enslaved to sin. We inherited from our first parents a “sin nature” in which our natural tendency is to sin — to do what is ungodly. We were separated from our holy and heavenly Father by a great chasm that none of us could cross. No amount of good deeds are good enough to pay the wages of sin or to bridge the gulf between God and us. As a result of our sinfulness, death is unavoidable. But Adam was not the only one in history to change the world. There was another.

Romans 5:18 Therefore, as one trespass led to condemnation for all men, so one act of righteousness leads to justification and life for all men.

In Paul’s first letter to the Corinthians, he wrote, “For as by a man came death, by a man has come also the resurrection of the dead. For as in Adam all die, so also in Christ shall all be made alive.” (1 Corinthians 15:21-22) Jesus was the second Adam who made things right after the first Adam messed things up. Later in the same chapter, Paul wrote that the first Adam became a living being while the second Adam became a life-giving spirit. Both men changed the world, but Jesus Christ gives life to sinful people who are cursed to die. Through His one act of obedience, God’s wrath was satisfied and forgiveness was provided. Through His one act of obedience, God and man, who were once separated by the great chasm of sin, are now reconciled.

One Act of Faith Leads to Life Everlasting

One might read verse eighteen and conclude that Jesus’ act of obedience and His sacrificial death on the cross is enough to save all mankind. Some think that mankind does not need to respond to Jesus. Is Jesus work on the cross enough to save mankind by itself? Does mankind need to do anything to receive God’s gift of grace? Paul addressed that issue in this passage as well, although it might be easily overlooked. Look at verse seventeen.

Romans 5:17 For if, because of one man’s trespass, death reigned through that one man, much more will those who receive the abundance of grace and the free gift of righteousness reign in life through the one man Jesus Christ.

No! Did you catch the part in verse seventeen that might be overlooked? Notice what Paul wrote: “those who receive the abundance of grace and the free gift of righteousness.” Only those who receive God’s grace and righteousness will have justification and life. Some consider Jesus’ death on the cross as payment for everyone’s sin. These people believe that because God so loved the world and His Son, Jesus, died for mankind’s sin, then all people are automatically saved and will receive forgiveness and eternal life. That is called universalism and that is not what Paul meant. It is those who receive God’s grace who are justified — who are declared righteous. It takes faith in Jesus Christ to be declared righteous with God.

When a person trusts by faith in Jesus Christ as Lord and Savior, he or she is re-created or born again. If a person is still in Adam, he is an old, fallen, imprisoned creature. If a person is in Christ, though, he is a new creature, a man reconciled and redeemed. Which man are you? Are you out with the old and in with the new? Or are you holding on to the old man, condemned, under wrath and separated from God? No amount of sin is beyond the grace of God. This passage said, “Where sin increased, grace abounded all the more.” (Romans 5:20) Which man are you? Christ does not merely expose a distinction between the old man and the new man — He forces a decision. The decision is yours. By trusting in Jesus Christ, you can have new life today.

In closing, there were two men who did two very different things and both changed the world. From Adam, we all received death, but through Jesus Christ we receive life everlasting. If you have trusted in Jesus Christ, then you are a new man. If not, you can be. But your new life in Christ does not end with a simple decision to trust Him – that is just the beginning. God expects you to do something with the new life He has given you. Remember the very first chapter of this letter where Paul wrote what many consider to be the theme of the whole letter.

Romans 1:16 For I am not ashamed of the gospel, for it is the power of God for salvation to everyone who believes, to the Jew first and also to the Greek.

The Gospel of Jesus Christ is the power of God for salvation. It is God’s work to save a condemned people through the death and resurrection of His Son. You may think that one person cannot change the world. Adam did. Jesus most certainly did. You can, too. Oftentimes, we may feel insignificant. We may feel that what we do does not really matter. That may be true for a lot of things, but you may have no idea the impact you have on others by the simple choices you make. One simple act can be the difference between life and death. Someone you meet may be lost and still condemned to death and you have the words of life that could save them. Someone in this community could be discouraged, suffering, or worse perishing in unbelief and you have the hope that could change that. Are you going to take one act of faith to change the world for them?

The word “gospel” means “good news” but it is only good news if it is received in time. Think about when you heard the Gospel, when someone told you about Jesus Christ. It may have been your parents, a friend, a Sunday school teacher, a pastor, or it may have been a complete stranger. Imagine if you have gone through your entire life never hearing the Gospel of Jesus Christ, and today was your day to die. If only someone had shared the Gospel with you. If only you had heard the Gospel and believed in Jesus Christ, but no one cared enough to tell you. You would leave this earth with no hope of eternal life. That is someone in this community. What are you going to do about it? Sharing the Gospel with people does not guarantee they will believe. But then again, your job is not to save them. That’s God’s job. Your job is to tell them.

One simple act. Share the Gospel and change the world. Will you do it?

This sermon was delivered at Good Hope Baptist Church in Wake Forest, NC. More information about Good Hope may be found at the following site: www.GoodHopeBC.org. 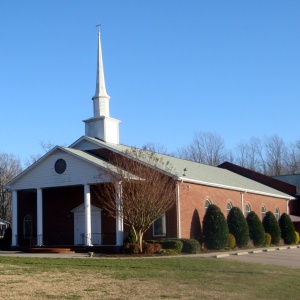